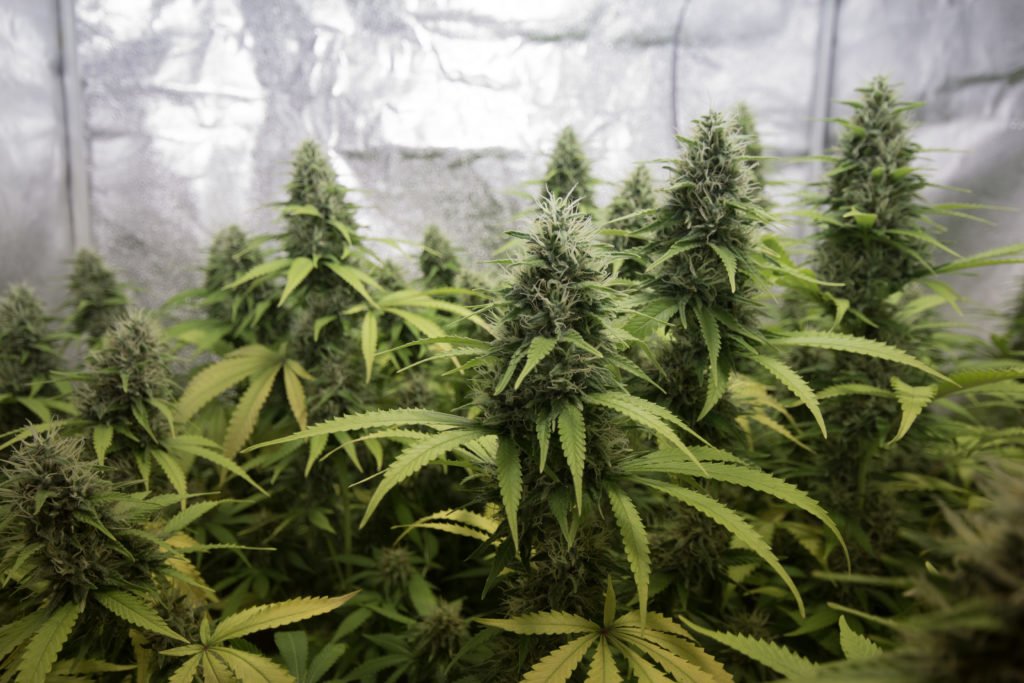 The energizing sativa high makes it an in-demand product and incredible user experience. True aficionados would say smokers have not smoked until they experienced it. Its potency derives from its high THC content, which has highly activating and cerebral effects. Many people who prefer it will not consume anything else.

The Sativa weed plant originates in regions close to the equator and including parts of Colombia, Jamaica, Mexico, Southeast Asia and Thailand. It has played a role in many ancient civilizations and was employed to perform religious ceremonies, connect with spiritual essences and spark divine connections.

Sativa is a member of the Cannabaceae Hemp family. Its name is derived from sativus, the Latin word for “sown” and “cultivated.” It has a lower chlorophyll content, so is best grown outside with sunlight. Outdoor growing is also best to accommodate its potential to grow up to 20 feet tall. Most plants average a height between 8 and 12 feet and take between 10-16 weeks to mature after initial flowering. The plant’s duration is annual.

Sativa strains tend to be aromatic and flavourful. The seeds of the cannabis sativa plant can be used to make hemp oil, for cooking and industrial uses. The flowers and other parts of the plant contain cannabinoids. These cannabinoids are used for spiritual, medical and recreation. It can be consumed via smoking, vaping, edibles such as pill form, or prepared as teas and tinctures.

Aficionados say you have not really experienced true marijuana until you’ve experienced sativa. Its potency derives from its high THC content, which has highly activating and cerebral effects. Many people who prefer it will not consume anything else.

Cannabis sativa can be hallucinogenic, sedative, analgesic, anti-inflammatory and hypnotic, and stress relieving. However, sleep problems and some types of mental health and neurological issues may be worsened by using the products of sativa plants. Using cannabis sativa hybrid strains produce an uplifting high which is a boosting way to start your day.

Marijuana strains can be confusing for people unfamiliar with the subject. Hybrid cannabis strains are the result of breeding a pure sativa strain cannabis plant with a pure indica cannabis plant. The result will end up being either a hybrid plant with more sativa dominant properties or indica dominant strains that produce more of an indica type of effect when smoked or consumed.

Sativa leaves have long and thin rather than short and wide leaves characteristic of the indica plants. Like the leaves, the finger-like buds are also long and thin.

Satica provides invigorating, uplifting cerebral effects that pair well with physical activity, social gatherings, and creative projects. Hybrid and cross-breed strains with indica will balance and smooth some of its potent, psychoactive and stimulating effects.

Indica strains of marijuana tend to produce a much more sedating high and will typically put someone into an extremely relaxed and introspective state of being; a state users all “couch lock”, especially if the product has high THC levels. Indica strains are typically smoked or used by marijuana enthusiasts at night to help them sleep, or before settling in to watch a long movie. Indica strains produce a far more cerebral high compared to a sativa.

Where Are The Best Sativa Strains Grown?

As any recreational or medicinal marijuana user will tell you, the best marijuana grown on earth comes out of the Pacific Northwest, which stretches from Southern Oregon, through Washington State, all the way up to British Columbia.

It’s not so much the weather that is in this area that creates the best cannabis in the world, rather it is the culture. The Pacific Northwest has the strongest cannabis culture on the globe, putting Amsterdam to shame.

If you want to find the best sativa strains in the world, look no further than this area.

For example, if sativa is your strain of choice then try some flower out of BC that might include sour diesel, green crack, strawberry cough, maui wowie, candyland, or cinex.

Once you’ve tried any of these popular strains grown in BC Canada then you’ll likely agree that it is the best marijuana in the world, hands down.

The strength of sativa weed makes it an optimal medicinal marijuana pain reliever, appetite stimulant, anti-depressant and migraine solution. As a non-drowsy alternative to indica weed, which puts users in a deep relaxed state, it is easy to use in the daytime without sleepiness.

Sativa strains are not typically used for medicinal purposes. They do not possess the same pain relief or sedative effect that the medicinally preferred indica plant produces.

Most medicinal cannabis users have trouble sleeping, eating, and relaxing, thus the hyper-stimulating effects of a sativa are likely to be extremely unpleasant to a medical patient, especially one that is chronically fatigued.

A sick or ailing person that uses sativa will not likely get a healthy burst of energy from a sativa, rather it is more likely that they will get an extreme bout of restlessness or suffer from an anxiety attack.

The highs inspired by Sativa differs from the other, indica form of cannabis. Once considered a tool for ancient mystic divination, its purpose was to inspire visions rather than relax and soothe. For its heightened energy and sensory effects, a sativa high is best experienced in the daytime.

What is a Sativa User Likely to Experience?

Sativa marijuana users are likely to feel a fast onset of energy within seconds of smoking or eating the flower. It is not uncommon to feel a body high, which typically feels like a slight energetic buzz or vibration pulsing through your arms, legs, and body core. Sativa users also often feel a strong desire to socialize. For this reason, sativa marijuana is the preferred strain to take before a party or social event that might require you to show up with an energetic and sociable disposition.

Rather than sitting on the couch and watching a movie or taking a nice long relaxing nap, a sativa user may feel the urge to do some light or heavy gardening, play a game of basketball, or workout at the gym. Energetic sativa highs also rarely cause a comedown effect.

Why Are There So Many Marijuana Strains?

Marijuana users, botanists, researchers, and scientists have been heavily breeding and cross-breeding marijuana strains for several decades now. This heavy breeding process has created thousands of credible and recognized cannabis strains, particularly over the last two decades. Since each cannabis strain produces a totally different high, there is a tremendous novelty factor in creating a new plant strain in order to produce a more desired marijuana high. Some of the world’s most popular cannabis strains include sour diesel, lemon haze, silver haze, Jack Herer, and many others.

Beyond recreational reasons to breed or cross breed a cannabis plant in order to create a new strain, there is also a strong medicinal incentive to do so. Many cannabis strains are much more conducive to medical marijuana users and patients due to the pain relief properties and sedative cerebral effects that they produce.

Are Sativa Strains High in CBD?

There are two main categories of cannabis plants, hemp plants, and marijuana plants.

Hemp plants have virtually no THC, and are often used in industrial applications of CBD extraction.

Cannabis strains exist that are very high in CBD, with little to no THC.

Typically due to its more medicinal conduciveness, indica marijuana strains tend to be grown with a much higher CBD level than what is normally found in a Sativa strain.

There are, however, several well-known sativa strains rich in CBD such as Harlequin, Ringo’s gift, sweet and sour widow, and many others.

There are many highly distinctive, enjoyable sativa strains that have been around since the 1960s and 1970s. Each strain has its own benefits. Following are a few of the most popular strains and what they can do for us.

Jack Herer is a sativa dominant strain of cannabis named after the marijuana activist Jack Herer. It was bred to capture a high as well as a rich resin production. It was as created in the mid-1990s and medically distributed shortly thereafter. The strain has won awards for being both high quality and potent.

It takes about 50 70 days for this strain to bloom, even indoors. Users describe its scent as piney, spicy, earthy and woody. It is useful for creativity, mood enhancing and provides focus. If you have issues with depression, try some Jack Herer.

Durban Poison remains a trendy sativa choice for a happy high. For a refreshing shot of energy to get stuff done through your day, choose Durban Poison’s sweet smokiness for a burst of focus and activity. It contains a high quantity of THC and works well for individuals with ADD and similar mental issues. Some of the feelings you’ll experience with Durban Poison are:

Use Durban Poison for:

One of the typical side effects of this strain of marijuana is anxiety, so if you are treating anxiety, use Durban Poison cautiously.

If you need to replace drinking caffeine, this might be the kick you need to get you started in the morning. Get inspired and energized with Durban Poison.

If you want a happy start to your day, start it out with Amnesia Haze. This hybrid strain of marijuana remains uplifting and will give you a lovely burst of morning energy. It won first place in the Sativa cup in 2004 and 2012 and remains a favorite in Amsterdam coffee shops.

Amnesia Haze has an earthy, citrusy and lemony taste, and originated in Jamaica and Southern Asia. The happy buzz lasts for at least two hours yet is mild enough to use before you go to bed.

Expert marijuana growers will tell you that indica strains are usually easier to grow than sativa strains because indica has a shorter flower period. Indica strains also typically produce a far larger marijuana yield, thus making them a grower’s favorite. Sativa strains take longer to flower, produce less bud, and tend to be bigger and thus harder to trim and manage, especially if you are low on adequate growing space.

Buying your sativas from a provider who lab tests their products and guarantees delivery ensures you receive reliably potent product delivered safely and discretely.

Buying Sativa strains online from Cannabis Care is the most secure, safe, and discreet way to get high-quality Sativas.

Order Sativa Flowers in Winnipeg, Brandon and everywhere else in Manitoba!

Get Sativa Flowers in New Brunswick

Get Sativa Flowers in St. John's, Corner Brook, Paradise and everywhere else in Newfoundland and Labrador!

Find Sativa Flowers in Charlottetown, Summerside and everywhere else in Prince Edward Island!

Order Sativa Flowers in Yellowknife and everywhere else in Northwest Territories!

Buy Sativa Flowers in Whitehorse and everywhere else in Yukon!

Get Sativa Flowers in Nunavut