Get the Shatter You Want – Canada’s Best Shatter.

Why Should I Buy My Shatter Online From CannabisCare.IS?

If you are looking for Canada’s best medical-grade cannabis shatter, look no further.

Your best choice is to buy shatter online from a Canadian supplier who:

We are the Canadian online shatter supplier that you’ve been looking for.

We ensure and guarantee potency, we ship securely, and we provide you with a tracking code for each order. We also guarantee delivery of your shatter and will replace any orders in the improbable event that they are lost.

Cannabis Care Is Your Trusted Source For Canada’s Best Shatter

We provide the best shatter, with guaranteed potency for precise dosing. We offer answers to all your questions and solutions for all the issues around purchasing shatter in Canada.

Purchase your shatter online for mail-order delivery for the ultimate in privacy, convenience, and discretion.

Get high potency shatter delivered directly and discreetly to your door. Order today.

Shatter is a cannabis oil-based cannabis concentrate. It is a marijuana product that is translucent, with a colour ranging from bright honey-like amber to dark olive oil, and is much more potent than traditionally smoked marijuana. One of the most popular marijuana concentrates, shatter is a concentrated extract that is famous for its high THC content.

Also colloquially known as “shatter weed,” it is produced by combining components of the weed (cannabis) plant with various solvents. Readers can find more details of the cannabis oil and shatter extraction process below.

What’s With The Name “Shatter”?

Shatter gets its name from its consistency, which is often solid enough to be brittle. The term “shatter” originated as a slang term for this hard, glassy, translucent variant of cannabis oil but is now considered the definitive term for it.

Shatter’s Cannabinoid Profile Determines How Shatter-y It Is

The cannabinoid product’s profile affects the product’s texture, ranging from extremely brittle (as mentioned, thus the name “shatter”) to a taffy-like consistency. 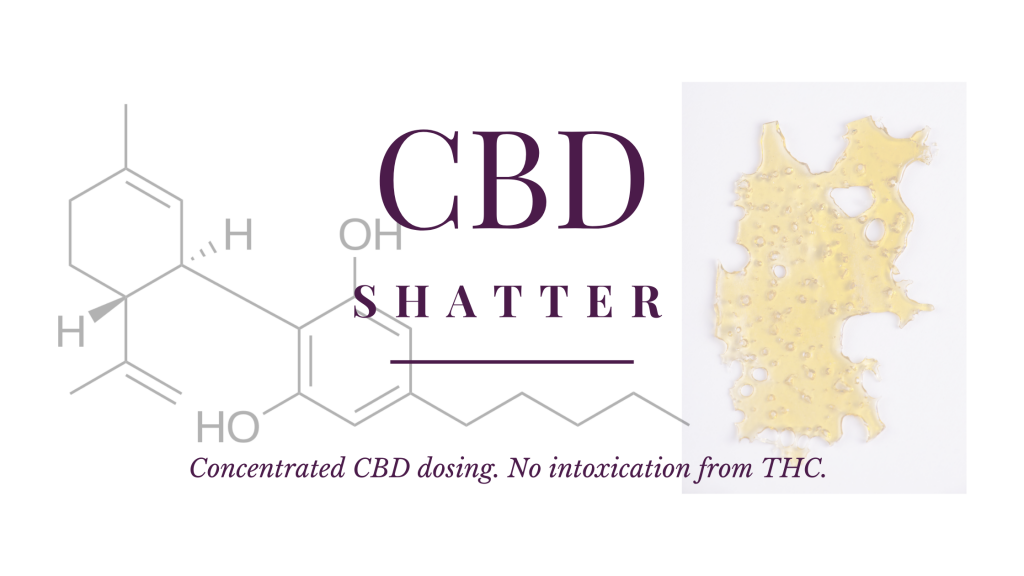 CBD is a popular cannabinoid whose profile has grown immensely in recent years. CBD is short for cannabidiol, and its popularity has come chiefly due to its effectiveness in treating many physical and mental conditions.

CBD Shatter Delivers Cannabidiol – It Does Not Get You High

Although CBD is a cannabinoid, it does not intoxicate people who use it. For this reason, CBD has become a recognized treatment for children – most famously for epilepsy.

While CBD shatter is almost certainly not suitable for children, it remains an excellent alternative to other forms of CBD delivery for experienced patients. It can also be used instead of THC shatter for those who wish to reduce their THC consumption but still prefer the concentrated dosing that shatter provides.

CBD is ethical and suitable for any patient who doesn’t want to get high. It’s a useful medicine that treats many ailments and symptoms ranging from epileptic seizures to cigarette addiction to acne.

How Can Shatter be Medicinally Beneficial?

The most significant benefit of shatter is how it can deliver a potent dose of concentrated medical cannabis for those who really need it, for instance, individuals coping with severe or chronic discomfort or intense nausea.

Medical Cannabis Can Benefit Many Conditions. So Too Can Shatter.

Conditions that people may treat with shatter include:

CBD shatter, like CBD oil, is high in cannabidiol (CBD) and very low in THC. Consumers who want the medicinal and therapeutic benefits of cannabis along with a clean (non-smoking) delivery and none of the intoxicating effects of THC enjoy this product.

For conditions where CBD may be appropriate for treatment, CBD shatter can provide a highly concentrated and efficient way of dosing. These conditions may include:

How Is Shatter Consumed?

As a cannabis concentrate, shatter is consumed via heating and inhalation. The methods to do so may include dabbing, vaping, and even smoking (although smoking shatter is not recommended).

The Best Way to Consume Shatter: Vaping Or Dabbing

By far, the best way to consume shatter is to heat it to the point that it releases its cannabinoids in the form of vapour, but not so hot that it burns.

For this reason, while one can smoke shatter, it is not recommended to do so. Instead, shatter should be vaporized or dabbed.

Of these two methods, vaporizing shatter is a more user-friendly and portable method, while dabbing perhaps produces the purer vapour.

Of the two, we recommend vaporizing for its convenience, portability, and ease of use.

How Is Shatter Vaped?

Shatter vaping is performed in a specialized vaporizer that is intended for shatter. As with standard cannabis vaporizers, shatter vapes vary greatly. They can be handheld or tabletop devices, battery-powered or plug-in. Some allow users greater precise temperature controls.

Vape pens are a popular way to vaporize shatter on the go. They are portable and effective.

Another popular device to consume shatter is a small handheld electric vaporizer called a vape pen. These are typically battery-powered (nearly exclusively) and can often be charged with a USB power adaptor plugged into the wall or any other suitable power supply such as a power bank or a car cigarette lighter adapter. For this reason, they are convenient to store and to use. Additionally, vape pens may be loaded with a substantial amount of concentrate and deliver more substantial hits.

Vape pens can be loaded with shatter manually, though some use sealed capsules of cannabis. Some vape pens are among the dual-purpose vapes that allow for regular marijuana buds and cannabis oil.

What Is Dabbing And What Are Dabs?

Dabbing is a method of vaporizing marijuana using a specialized vaporizer called a dab rig to heat the shatter.

A dab rig looks similar to a bong, but it uses a “nail” on its end instead of a glass bowl. Using a butane torch or e-nail, you must heat the nail until it is over 600 degrees – glowing red hot. Holing the shatter with a small metal stick, you bring it near the hot nail to allow it to vaporize. You then inhale the vapour.

Shatter Was Made for Vaping And Dabbing – Not For Smoking 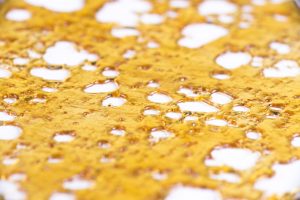 Shatter was not developed to be smoked but to be vaped.

This includes standard vaporization and dabbing. It is ideal for vaping because its consistency gets softer when exposed to heat, and it can release its cannabinoids in full when vaped rather than when smoked.

Shatter is an effective alternative to smoking cannabis. As more people move away from smoking, weed products designed for vaping (as well as edibles) are the future of therapeutic marijuana consumption. In addition to its potential health benefits, many users report anecdotally that it provides a more clear-headed, potent, and enjoyable high than can be experienced from smoking.

How to Smoke Shatter (If You Must)

It’s certainly possible to smoke shatter conventionally in a pipe. If you do, make sure you’re holding the flame away from the oil and inhale it more slowly than you would smoke buds. You want the oil to bubble lightly and steadily. Some also choose to put a small amount of shatter on top of their buds.

Don’t Smoke Shatter, Though – Vape It

Smoking oil burns away much of the active ingredients, and doctors have reported wheezing and coughing in heavy pot smokers (though no links have been established between smoking pot and lung cancer to this point). Vaping shatter is the preferable way to consume because it is more efficient and healthier.

The difference between shatter and wax is minimal. Shatter is hard and looks like amber glass. If you drop a large flat piece, it will shatter. Wax is stickier, more malleable. However, they are essentially the same thing, concentrated cannabis oil. Another form of cannabis oil is honey oil.

How to Make Shatter

We don’t recommend you make your shatter, but rather, enjoy lab-tested, potency guaranteed shatter created by professionals and discretely delivered to your door.

(The following is for informational purposes and should not be considered a guide on making shatter. Seriously – leave it to the pros!)

It’s important to know that cannabis shatter is divided into two categories based on how the oil is extracted from the plant material of the cannabis plant: BHO shatter and CO2 shatter. Both extraction processes will induce the desired effects in the mind and body of the user. Some believe that an indica strain makes for the best shatter, and specialized shatter strains exist, too.

Making shatter is basic chemistry on paper, but reading online accounts from oil-makers demonstrates the many ways you can screw it up or even hurt yourself (making Butane Hash Oil).

For this reason, we have kept the details below to be intentionally vague. We don’t recommend making your own shatter.

Caution: The BHO process to extract shatter is hazardous. Butane is highly flammable.

The CO2 extraction process and consumption is safer and better for the environment because it doesn’t release carbon emissions (pollution). CO2 is what makes soda carbonated, and it’s also highly effective in cannabis extraction.

The medical marijuana community more often uses the CO2 process because it can isolate and extract other cannabinoids besides THC and CBD. Future technological breakthroughs in CO2 and other extraction methods will give scientists and growers the ability to work together to produce and extract new strains of marijuana specifically bred to fight specific physical and mental ailments.

Find shatter online in Ontario and get it delivered directly.

Where to buy shatter in Toronto? Shatter delivery in Toronto is most convenient via mail order. Order shatter, Toronto! shatter toronto

Get Shatter in Nova Scotia

Get Shatter in Winnipeg, Brandon and everywhere else in Manitoba!

Where to buy shatter in Winnipeg?

Purchase Shatter in Newfoundland and Labrador

Get Shatter Delivered to St. John's, Corner Brook, Paradise and everywhere else in Newfoundland and Labrador!

Get Shatter in Prince Edward Island

Get Shatter Delivered to Charlottetown, Summerside and everywhere else in Prince Edward Island!

Find Shatter in Yellowknife and everywhere else in Northwest Territories!

Order Shatter in Whitehorse and everywhere else in Yukon!